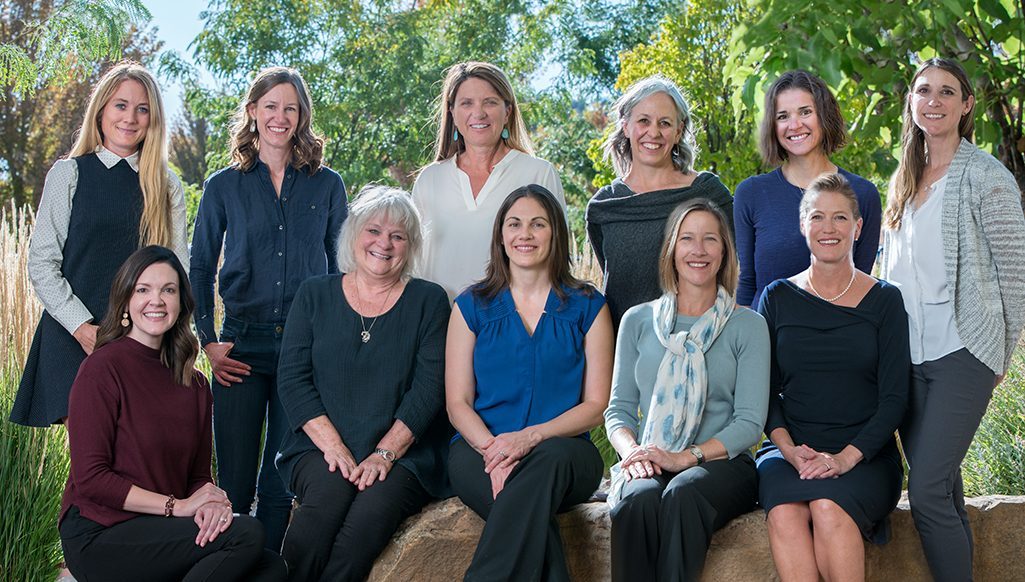 Each of our caring physicians, physician assistants and nurse practitioners chose this field for a reason. They genuinely enjoy helping manage the health concerns surrounding motherhood and being a woman. Every women’s healthcare provider in our practice has a long, successful track record in women’s healthcare. You can be sure that we’re a knowledgeable medical partner at every stage of your life.

After growing up on the east coast Dr. Berarducci earned her bachelor’s degree from the University of Notre Dame and received her medical degree from the Philadelphia College of Osteopathic Medicine. She completed her obstetrics and gynecology residency at the Naval Medical Center in San Diego, California. She subsequently served on active duty in the United States Navy practicing overseas in Japan and in Washington state before joining the team in Durango in 2018.

Dr. Berarducci stays busy outside of work. She enjoys traveling, skiing, hiking, scuba diving and spending time with her husband and son.

Born and raised in Durango, Dr. Fredrickson moved north to complete her undergraduate and medical education at the University of Colorado. While pursuing her education, she traveled and studied in Spain and Latin America, becoming fluent in Spanish. Dr. Fredrickson completed her OB/GYN residency at the University of Utah in Salt Lake City. In Utah, she received extensive training in all areas of clinical and surgical women’s care. Jeunesse enjoys the excitement of labor and delivery, the rewards of minimally invasive surgery, and the opportunity to care for women during meaningful moments in their lives.

It has always been Dr. Fredrickson’s dream to return home to Durango. She loves the ideal climate and magical combination of mountains, deserts and rivers. In her free time, Jeunesse enjoys exploring the Colorado Plateau with her husband, Blake, and daughters, Anya and Siena.

After finishing medical school at Wayne State University in Detroit, Dr. Lasich complete her residency at Sinai Hospital, also in Detroit. She is board certified in obstetrics and gynecology.

Dr. Lasich’s love of the Southwest and the Four Corners region took her to Flagstaff, Arizona, where she practiced from 1997-2003. She has been a valued member of Four Corners OB/GYN since 2003.

A member of Four Corners OB/GYN since 2009, Dr. Pallister received her degree from the University of Kansas, and then attended medical school at the University of Utah School of Medicine. Her residency was at Dartmouth Hitchcock Medical Center. Dr. Pallister was academic faculty in the OB/GYN department at Dartmouth Medical School. There she performed research, taught resident physicians and practiced general obstetrics and gynecology. She also practiced in Seattle. Dr. Pallister is a fellow of The American College of Obstetrics and Gynecology, and is an Anerican Board of Obstetrics and Gynecology Diplomat.

Dr. Pallister has an interest in general office practice, infertility genetics and caring for those with intellectual and developmental disabilities.

Together with her husband, Dr. Kane Anderson, Dr. Pallister has three children. They enjoy spending time in the Durango outdoors.

A board-certified specialist in the field of obstetrics and gynecology, Dr. Palmer is a native of Denver, Colorado. She received her undergraduate degree from the University of Vermont and her medical degree from the University of Colorado. After completing her OB/GYN residency in Asheville, North Carolina, she returned to Colorado to work in a private practice in Steamboat Springs.

Dr. Palmer’s love of adventure and travel took her to New Zealand where she practiced OB/GYN medicine for a year before returning to Colorado to join Four Corners OB/GYN. She loves living in Durango, and spends her free time skiing, hiking, running, mountain biking, reading and painting.

Dr. Priebe earned her bachelor’s from Vanderbilt University, a master’s in neuroscience at Georgia State University and a medical degree from the Medical College of Georgia, followed by her residency at the Mountain Area Health Education Center in Asheville, North Carolina. She is a fellow of the American College of Obstetricians and Gynecologists, an American Board of Obstetrics and Gynecology diplomat, and a member of the La Plata Medical Society.

Dr. Priebe, her husband and two children have called Durango home since 2003. They enjoy skiing, biking and hiking. She is passionate about global woman’s healthcare and volunteers in Central America.

Dr. Todd joined Four Corners OB/GYN in 2011. She attended Western Washington University, completed medical school at Oregon Health and Sciences University, and then continued her southern migration to San Francisco for her residency. She is board certified in Obstetrics and Gynecology and a fellow of the American College of Obstetrics and Gynecology. Dr. Todd chose the OB/GYN field because she was attracted to its wide variety, as well as caring for women throughout their lives. She has a special interest in minimally invasive surgery, reproductive access and rights and transgender care.

Dr. Todd is one of four children and has a close relationship with her family. She has embraced the outdoor activities of the Four Corners region and spends as much time as possible exploring the area. She is an athlete and participates in endurance events.

A board-certified women’s health nurse practitioner, Aimee has a special interest in high-risk obstetrical care and family planning. She received her undergraduate degree from Grand Canyon University, a private Christian College in Arizona, and has earned a master’s degree with an emphasis in women’s health from Frontier School of Family Nursing and Midwifery. For eleven years, she practiced nursing within the labor and delivery unit at Mercy Regional Medical Center in Durango, Colorado.

Aimee lives in Durango with her husband and four children. Her family enjoys hiking, biking and skiing. Aimee’s hobbies include reading, gardening, running, skiing and tending to her assortment of farm animals.

As a certified Family Nurse Practitioner, Lauren Melancon has loved caring for women across their lifespan. She earned her Bachelor of Science in Nursing at Nicholls State University in Thibodaux, LA. She first worked at the local state charity hospital as a Labor and Delivery RN. She then pursued and earned her Master of Science in Nursing at Loyola University New Orleans. Her practice began in rural family medicine in Northeast Colorado. Lauren’s love for women’s healthcare led her to join Four Corners OB/GYN in the spring of 2015.

Lauren is happily married to her husband Ben and together they have four children. She feels blessed to be in Durango to raise their family. As the kids get older, she hopes they fall in love with Colorado as much as their parents have!

A graduate of the physician assistant program at University of New Mexico Medical School, Nancy has worked in family practice and OB/GYN in the Four Corners area for more than seventeen years. She joined the Four Corners OB/GYN team in 2009. Nancy volunteered as an OB/GYN PA for several years at a low-income women’s clinic and has conducted women’s wellness education seminars in the Four Corners area A graduate of Brigham Young University in Spanish literature, she speaks fluent Spanish and has taught English in Spain.

Nancy grew up in the Four Corners and returned after years away, to raise her three, now grown, sons here. Her joys include her family, friends, music, swimming, literature and travel, as well as medicine.

Sara joined Four Corners OB/GYN in 2014. She earned her bachelors degree at the University of Colorado Boulder and her master’s degree in Physician Assistant studies at Touro University in Henderson, Nevada. Prior to returning to her hometown, Durango, she practiced in Salt Lake City, Utah at a community health clinic and an internal medicine office where she developed a love for providing care to women of all ages.

She and her husband grew up in the Four Corners. They have two very busy little boys. Spending time with their guys is one of her favorite and main activities at this time, but when she can find time she also loves biking, running, baking, skiing and spending time with friends and family.

Based in Durango, serving the Four Corners region.

A privately owned practice, Four Corners OB/GYN operates from the Mercy Medical Plaza, and is independent of Mercy Medical Center and Centura Health.

Please ask us about our Pagosa & Cortez clinics!

I'M PREGNANT (OR WANT TO BE)! | IT'S TIME FOR MY CHECKUP | IS THIS MENOPAUSE | NORMAL OR NOT?
MEDICAL PROVIDERS | MEET OUR PATIENTS | NEWS & EDUCATION | PATIENT INFO | CONTACT